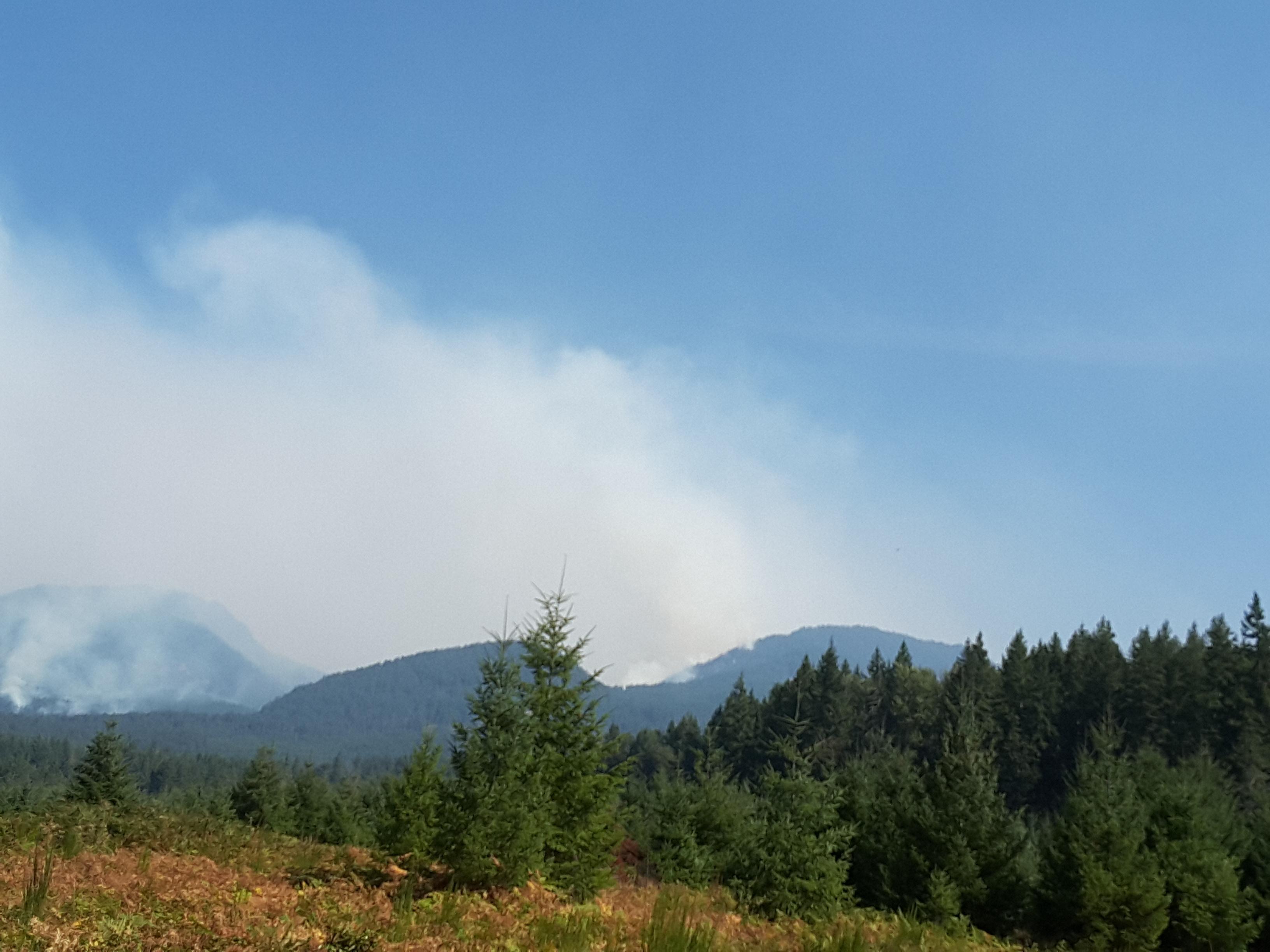 On August 9, the Goat Rocks Fire was started by a lightning strike in the Goat Rocks Wilderness. The fire has spread within the Wilderness and on adjacent land on the Gifford Pinchot National Forest. Most of the fire is burning in steep terrain with limited access, heavy fuels, and rocky bluffs.

A direct approach to suppressing this fire has little chance of succeeding and carries high risks of injury or death to firefighting personnel. An indirect approach is being implemented, mostly using existing roads to the west and north of the fire as containment lines. These roads, including Forest Roads 46, 4610, 4612, 018, and 1266, are receiving fuels reduction treatments including cutting brush, removing some of the smaller trees in dense stands, and chipping the resulting woody debris. The fire has not reached most of these containment lines.

Fire activity increases during periods of warmer, drier, windy weather and decreases when temperatures and winds drop and humidity rises. Most of the fire spread has been through fuels on the ground, mainly large woody debris such as rotting logs. These larger fuels will continue to burn until they are fully consumed, actively extinguished along the containment lines, or soaked by rain and snow.

Planned Actions
Material removal and improvements will continue on the 1266 and 041 roads. Brush 48 road to Snyder Mountain. Monitor fire growth in Coal Creek drainage and suppress with helicopters. Assess potential for line creation into Coal Creek. Suppression repair will continue. Scout for potential helispot location. Assess and develop contingency plans on structures and power infrastructure at Packwood Lake.
Chipping continues on the 46 road from DP 10 to Highway 12 to remove woody debris left from road preparation. Hazard trees are being felled on 46 road by hand crews. Repair work is being done on the 018 road to repair culverts to meet repair standards.
Continue to patrol the Goat Rocks, Timberline, Upper Timberline and Grizzly subdivisions, interact with homeowners and look for areas to improve structure preparation. Improve structure protection on northwest end of Packwood Lake.
Suppression repair will be assessed or is ongoing on all divisions.
Projected Incident Activity
12 hours: Tuesday night, reductions in spread as fuels become unavailable. Smoke production will remain constant as heavy fuels consume during evening hours. Increased atmospheric moisture will significantly reduce spread into the late evening and early morning hours.
24 hours: Wednesday, reduction in fire spread and behavior with increase in atmospheric and precipitable moisture. Fire will continue to creep in sheltered locations, but large movement will be unlikely. Fire spread in exposed locations near ridge tops should also be reduced.
48 hours: Forecast precipitation on Thursday will greatly reduce spread and begin to remove heavy fuel from the fuel profile. Expect increased smoke production, extended burn down times, and minimal spread in surface fuels. Heavy fuels will continue to hold fire until substantial moisture impacts the fire area.
72 hours: Fire behavior will be minimal as conditions return to near normal for the area. Expect creeping and low intensity surface fire.

Weather Concerns
On Tuesday, smoke thinned out of the Cowlitz valley after noon and transported east. Temperatures were around 80 with low relative humidity values near 25 percent on average as shallow marine air made it to the Cascades. Light east to southeasterly winds less than 10 mph over the incident area switched to southwest in the afternoon. Humidity recoveries in the morning were poor in the higher elevations.

Wednesday will be much different as a cold front moves through the region. There will be some light rain and higher afternoon humidity from 45 to 55 percent. Winds will generally be light in the morning but increase in the afternoon from the southwest on the ridges gusting to 20 mph in the Goat Rocks Fire area.

Expect a much cooler day Thursday with some mainly morning rain showers. Expect some drying and warming going into next weekend.