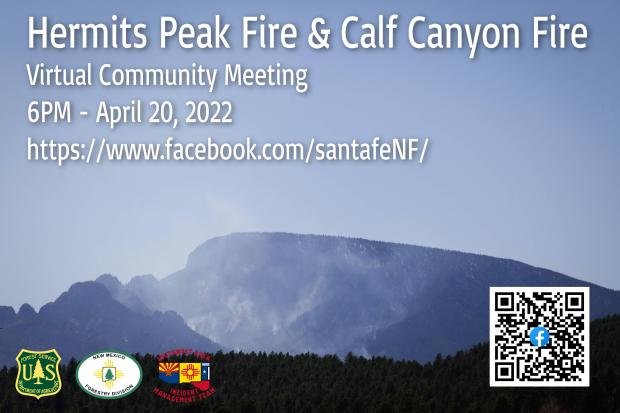 The Las Dispensas prescribed fire on the Pecos/Las Vegas Ranger District of the Santa Fe National Forest was declared a wildfire at approximately 4:30 p.m. on April 6, 2022. Although forecasted weather conditions were within parameters for the prescribed fire, unexpected erratic winds in the late afternoon caused multiple spot fires that spread outside the project boundary. Named the Hermits Peak Fire, the wildfire is approximately 12 miles northwest of Las Vegas, NM at the base of Hermits Peak in the Pecos Wilderness. The Hermits Peak Fire is burning through mixed conifer in steep, rugged terrain that poses challenges for firefighter access.

South Zone: Short Grass, Hardwood Litter, Timber (Litter & Understory) - Fuels remain atypically dry due to ongoing severe drought exasperated by persistently low humidity, high temperatures, and strong winds. The fire has been growing primarily through Ponderosa pine and true-fir timber stands with a significant amount of dead and downed fuels in the understory. Green-up in grass is nearly nonexistent due to extreme drought.

Central Zone: North - Continue a combination of direct and indirect line construction to prevent further northward growth of the fire between DP 352 and DP 188. Continue direct line construction West of DP188 west towards FR 76 East - Patrol the 434 road. Prevent further structure loss. Continue to prepare structures moving north as resources allow and conditions require. Evaluate alternatives and establish contingencies in the event the fire crosses the 434 road. South - Prevent structure damage in Mora and along communities in the adjacent corridors. West - Prevent structure loss along Highway 581 near Angostura. Identify primary and secondary line locations N of 581 to Black Lake. Structure Group(s)- Combined structure groups will continue to prep and prepare for structure defense and prep as condition and time available allow. Efforts will be prioritized based on probability of success and proximity of of VARs to threat. Other - continue to coordinate with the local utility companies to allow for operation of critical infrastructure. Continue to coordinate with law enforcement agencies to account for public safety.

North Zone: Continue strategic planning for the North Zone, working on a draft strategic plan. Work with the communities in the North Zone to identify values at risk and address concerns from the community and cooperators. Develop evacuation zones in coordination with the other zones, and continue to communicate and coordinate progress.
Projected Incident Activity
12 Hours: South Zone: Fire activity is expected to slow in the early morning due to relatively robust humidity recovery to 40%. The winds should diminish over most of the fire area after sunset, but the extremely dry fuels combined with easterly gap winds will produce westerly / down-canyon growth on the western flank overnight. Down-canyon wind-driven runs possible, particularly to the west of Barillas Peak, vicinity of Brazel Park, and west of Spring Mountain. Central Zone: Fire will continue to move west northwest on the south side of SR 518. In the Chacon Corridor fire will back down the slope towards SR 121. The northeast tip will continue to burn in a old aspen stand. Fire on the eastside will stay west of SR 434.

24 hours: South Zone: Slightly cooler and improved atmospheric moisture are forecast for the fire area along with south-southwest winds in the 25 mph range. Expect fire on the western flank to make ridge- and drainage runs to the northeast, producing columns with half-mile spotting. Most drainages on the west are aligned NE/SW, which will favor these wind/drainage aligned runs. Threat of thunderstorm development with associated strong outflow winds could produce rapid spread in a variety of directions. No spread expected on south or east flanks, but strong outflow winds could test these lines. Central Zone: Some slight moderation in fire behavior as relative humidity increases from a cold front passing through to the east. Fire will continue to move west to the crest, northwest along SR 185 and northeast towards SR 120.

48 hours: South Zone: Slightly cooler and improved atmospheric moisture are forecast for the fire area along with south-southwest winds in the 25 mph range. Expect fire on the western flank to make ridge- and drainage runs to the northeast, producing columns with half-mile spotting. Most drainages on the west are aligned NE/SW, which will favor these wind/drainage aligned runs. Threat of thunderstorm development with associated strong outflow winds could produce rapid spread in a variety of directions. No spread expected on south or east flanks, but strong outflow winds could test these lines. Central Zone: Fire activity will begin to increase as winds begin to increase again as they come out of the SW.

Weather Concerns
South Zone: Axis the upper level ridge of high pressure pivoted over New Mexico today, bringing near to near-record temperatures. Low humidity and unstable atmosphere again today, creating potential for explosive fire behavior in heavy fuels. While lighter winds were experienced during the day, a backdoor front will bring gusty east winds to the fire overnight. With breakdown of the upper ridge tomorrow, the threat turns to the potential for dry thunderstorms with associated outflow winds and additional ignitions. Critical fire weather conditions make their return on Tuesday as dry conditions and elevated winds look to prevail through the the remainder of the week. Further into the future, a trough is expected to impact the fire area on Friday with strong southwest winds and continued critically dry air.

Central Zone: DATE ISSUED: Monday 05/15/2022 Today's Observed as of 1500: Maximum temperatures ranged between 75 and 82 degrees. Minimum relative humidity values were 5 to 9 percent. Winds swung around to a more east to southeast direction through the afternoon, with speeds generally at 10 mph gusting to 20 mph. Angel Fire reported east-southeast winds of 15 mph gusting to 28 mph. Monday's Forecast: An influx of low level moisture will help fuel scattered afternoon and evening thunderstorms across the fire area, initially firing along the spine of the Sangre de Cristo Mountains. Maximum sustained winds will be west to west-southwest at 15 to 20 mph with gusts to 30 mph across the higher exposed areas, and south to southeast 10 to 15 mph with gusts to 20 mph in the valleys. Maximum temperatures will top out in the mid 60s in the upper elevations, to the mid 70s in the lower elevations. Minimum relative humidity values will be 12 to 17 percent. The Haines Index will be a 6. LAL 3. CWR 10 percent.

North Zone: Near-record to record temperatures are expected today alongside continued dry conditions. Winds will shift to a more southerly direction today, drawing up more moisture into the area. This will bring some relief to overnight recoveries. The potential for thunderstorms (wet/dry) enters the forecast tomorrow along with an increase in winds.