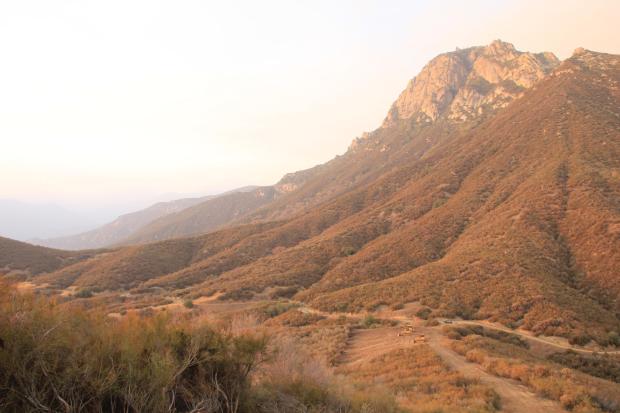 The KNP Complex in the Sequoia National Park was originally two fires from lightning occurring on September 9th, discovered and reported on the 10th, and designated a complex on September 11th. The fire has continued to grow in the Sequoia & Kings Canyon National Park and has spread northeast into portions of the Sequoia National Forest. The acreage now exceeds 40,000 acres and over 1,700 firefighters are assigned to the fire to include the Southern Area Incident Management Blue Team, CALFIRE and units from the California Army National Guard.

The priorities of the fire team are the protection of life and property in the communities surrounding the park; protection of the giant sequoias, and the protection of infrastructure and facilities in the park.  The absolute number one priority of the team is the safety and well-being of firefighters so they live to fight fire another day.

Planned Actions:
Utilize indirect tactics including both hand crews and dozers to continue line construction along Cal Fire protection areas and outside the western park boundary to provide for structure protection and minimize impacts to values at risk in Three Rivers, Silver City, Hartland and surrounding communities.

Continued protection and mitigation measures for all sequoia groves within the fire area, including the Giant Forest Sequoia Grove. When attributes of fire behavior are favorable to the landscape, allow fire spread to aid in fuels reduction in and adjacent to the groves.

Utilize strategic firing when needed to help meet the objectives identified for this fire.
Projected Incident Activity:
12 hours: Even with a slight increase in humidity, fire continues to spread through the night with backing, flanking and short uphill runs.

24 hours: Smoke settles back into the area resulting in moderate fire behavior consisting of backing,flanking, and terrain driven surface fire.

72 hours: Smoke continues to move out of the area leading to active and extreme fire behavior with uphill runs, crown fires and long range spotting.

Weather Concerns:
Dense smoke remained across the fire for most of the afternoon.

Minimal thinning was noted late in the afternoon along the western side of the fire.

Light winds and dense smoke will continue tonight into Sunday.