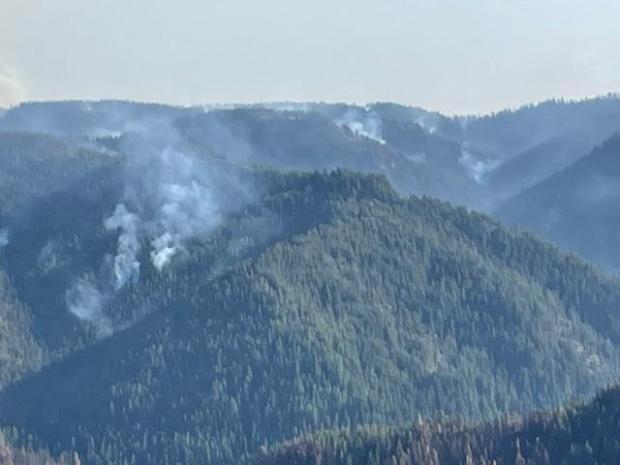 The Knob Fire was reported on Sunday, August 29, 2021 at approximately 2:30 in the afternoon.  It began about 3 miles south-southwest of Willow Creek on the Six Rivers National Forest.

By September 1, 2021 the fire was at 1,961 acres and 0% contained.  Several areas were under mandatory evacuation orders with other areas under warnings.  The forest decided to have the Knob Fire managed by the Incident Management Team working on the Monument Fire.

After work concentrating to get the fire under control, 100% containment was achieved as of the morning of September 12, 2021. Total acreage as of that date was 2,421 acres.  All evacuation orders and warnings had been lifted.

The final 209 report was produced the evening of September 14, 2021.  The cause of the fire remains undetermined.

Small pockets of fuel in the interior continue to be consumed.

No perimeter growth was observed.

Weather Concerns:
Mostly sunny skies and lighter winds were observed across the Knob Fire through the day. The day started out clear with areas of valley smoke, and nearly calm terrain-driven winds. Low temps were in the lower to mid-50s, with excellent humidity recovery.

Forecasted:
Mostly clear skies with areas of smoke are expected across the fire tonight though Tuesday, with a strengthening of the inversion expected as high pressure pushes back in from the south. Winds will remain light and terrain-driven through midday, then becomes west-northwest with gusts of 10 to 15 mph through the late afternoon and early evening hours.