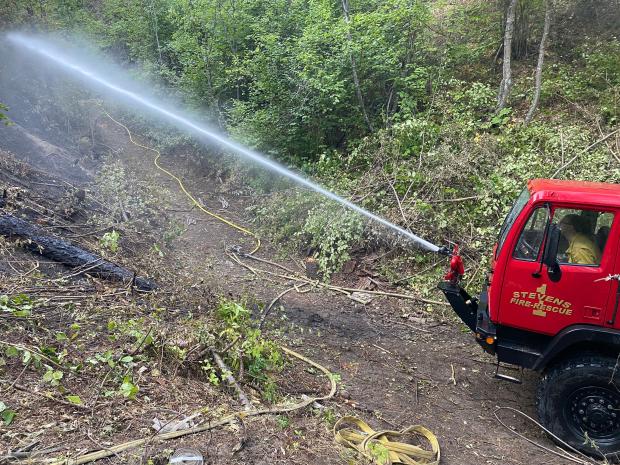 Final News Release August 17, 2021Orient, WA - The Nine Mine Fire is located 4.5 miles south/southeast of Laurier, WA. This lightning caused fire started on Wednesday, August 4th and has a burned approximately 164 acres of forested land. As of today, the fire is 100% contained. Evacuations and Road Closures: All evacuation levels have been lifted and there are no road closures. Yesterday Firefighters scouted the previous night’s rock slide towards the west edge and extinguished unburned fuels found near the fireline. They also patrolled and worked on extinguishing the few hotspots around the remainder of the fireline. Today In addition to patrolling for hotspots, firefighters will be cleaning up left-over hose, equipment and trash. Roads used by firefighting equipment during the fire will be stabilized. The public may see smoke interior to fireline over the next few days. Northeast Incident Management Team Three will be returning control of the fire to the local North Columbia Washington Department of Natural Resources fire district Tuesday night at 6:00 pm. Weather for today: Cold front is expected to bring rain showers during the day and possible isolated thunderstorms tonight. Gusty north winds will decrease overnight. Team Three thanks the community of Orient and the Orient School District for their assistance in the successful management of the Nine Mine Fire. Facebook at: https://www.facebook.com/newimt3/ andhttps://www.facebook.com/newfireinfo/Inciweb at: https://inciweb.nwcg.gov/incident/7783/

Planned Actions:
Mop up will continue in Divisions A and W, with continued focus on a spot fire from the burnout and continued mop up of the burnout area. Division Z is in patrol status.
Projected Incident Activity:
No expected fire growth

Weather Concerns:
The temperature reached low 80's today, with moderate RH. Skys overcast with some smoke. Tomorrow temps predicted in low 70's with high RH as a cold front passes over the area.