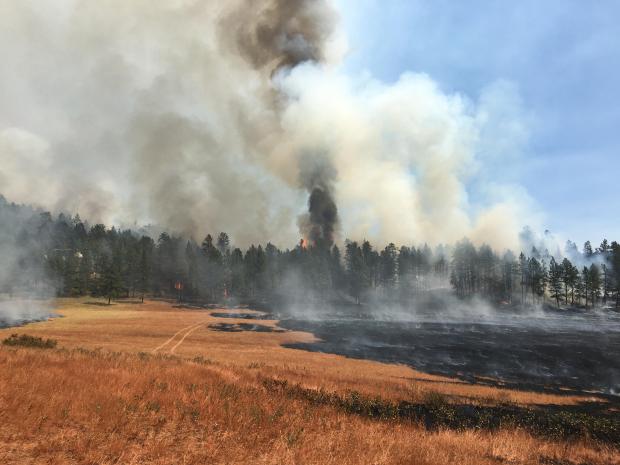 At 10:00 pm on August 21, Northern Rockies Team 3 turned command of Richard Spring fire back to the local unit. The Lame Deer fire was turned back on August 20.

The Richard Spring Fire was identified on August 8, 2021 about 10 miles southwest of Colstrip, MT. Since then, it has burned along the Tongue River and has threatened multiple communities and infrastructure within the area. Prior to the cooler temperatures, fire behavior was extreme with wind driven runs and is burning in mainly brush, short grass, and timber.

The Lame Deer fire was identified on August 10, 2021 and is located approximately 5 miles NW of Lame Deer, MT. The cause of both fires was coal seams.

Rosebud County Fire Warden and Rosebud County Sheriff have downgraded the evacuation status for the community of Ashland, including the Ashland Divide, Rabbit Town, North Tongue River Road, and the St. Labre Indian Academy Campus, from Level 3 “Go Now” stage to a Level 1 “Be Ready” stage.

The Northern Cheyenne Disaster & Emergency Services have downgraded the evacuation status for the community of Lame Deer, Muddy Cluster, and Rosebud Cut Across from Level 3 “Go Now” to Level 2 “Set” stage for all those who do not have medical conditions. Pre-evacuation notices remain in effect for Rosebud Creek from Greenleaf Creek to Cherry Creek and the Lame Deer Divide Road located on the Northern Cheyenne Reservation south of Lame Deer.

24 hours: Minimal fire behavior with fuels drying out from the recent widespread precipitation that occurred over the fire area on Friday.
Remarks:
Northern Rockies Team 3 released the incident to local control at 2200 on August 21.

Weather Concerns:
A dynamic weather pattern is expected for the next several days but with no high impacts expected. Mostly sunny conditions through Saturday afternoon will give way to scattered showers and isolated thunderstorms overnight into Sunday morning. West winds become gusty up to 30 mph Sunday afternoon behind the weak cold frontal passage. Normal to above normal temperatures in the mid-80s to near 90 degrees return Monday with mostly sunny skies. Another cold frontal passage late Monday brings scattered showers and cooler conditions through the middle of next week.