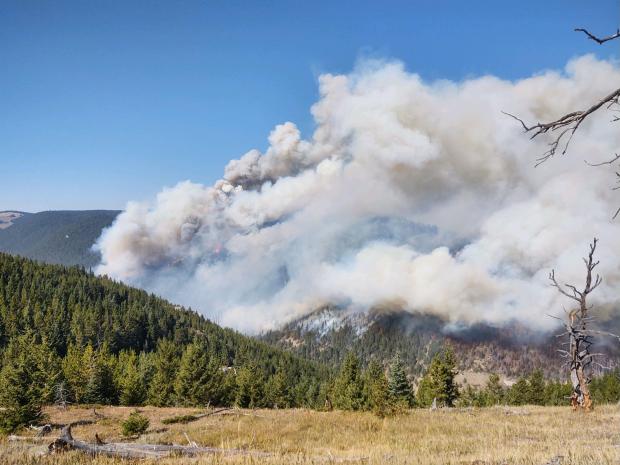 The Crater Ridge Fire ignited on July 17 in a remote area of the Medicine Wheel Ranger District of the Bighorn National Forest. Despite its isolated location, local response was quick with both aerial and ground resources. Over the remainder of July and through August, the fire continued to grow to over 6,000 acres in rough and often inaccessible terrain around Crater and Boyd Ridges.

This area of the Bighorn National Forest has a high volume of dispersed camping and hunters preparing for the fall season. Numerous travel trailers were located near the fire area. To allow for the safe exit of the public and ease access for the firefighters, the Forest implemented a closure in effect for much of the National Forest lands north of Highway 14A and east of the Big Horn/Sheridan County line.

There are two large burn scars in the Crater Ridge Fire area - the 1970 Pumpkin Creek Fire to the west and the 2003 Little Horn II Fire to the east. As the fire started to burn northward, it laid down when it reached both burn scars and continued to burn to the north between them. While burning continues in these scars, spread is greatly reduced due to the lesser amount of available fuel. A fire history is provided on maps of this incident.

The fire is burning in inaccessible terrain and the long-term plan is to keep the fire within established indirect control lines. Recent weather conditions have allowed opportunities to take direct action on accessible areas of concern on the active fire perimeter. This fire will be a long-duration event that will require staffing at crucial holding points and through critical weather events. The fire organization will continue to utilize firefighting resources until a fire season-ending event occurs.
Significant Events:
Moderate
Group Torching
Single Tree Torching

Planned Actions:
The Fire is still active in a few areas- Lodge Grass Creek, Crater Ridge and Mann Creek. Direct actions are taking place where the terrain will allow to secure the fire perimeter and extinguish any hot spots. Personnel are monitoring for smokes, mopping-up and continuing suppression repair work. Aircraft is being used in areas where its not safe to have people, due to steep and inaccessible terrain.
Projected Incident Activity:
Heavy fuels will hold heat, particularly in the steep, deep, inaccessible canyons that dominate the fire terrain. Some areas are completely inaccessible to check, even with aviation resources. Long-term fire behavior will depend on the weather, amount of residual heat, and the ability for the fire to move into available fuels.