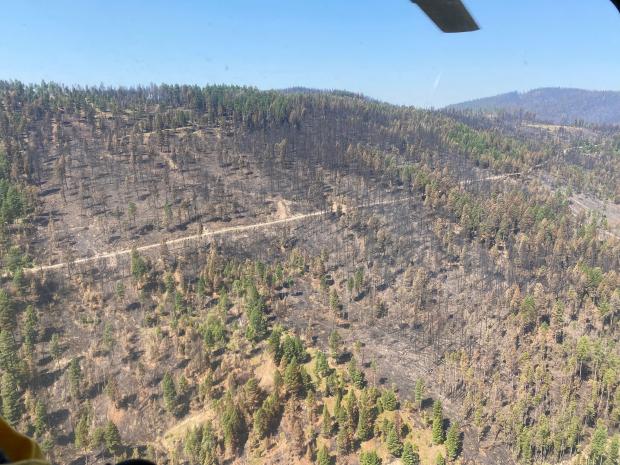 This fire originated in Granite County one mile southeast of Garnet Ghost Town and was reported and confirmed on Thursday, July 15. Estimated at 10 acres originally, this fire has grown to 800 acres and is fueled by thick timber and dense dead and down fuels. Steep, rugged terrain increases complexity. Fire is now burning in the counties of Granite and Powell. There are values at risk and evacuation orders and evacuation warnings have occurred, as well as area, road, and trail closures. It has transitioned to a Type 4 incident and the Incident Commander is Scottie Pina III.

Incident Type:
Wildfire
Cause:
Under Investigation
Date of Origin:
Thursday, July 15, 2021 3:00 PM MDT
Location:
15 miles SW of Ovando
Incident Commander:
MT DNRC
Incident Description:
Fire Activity Is Minimal. On Friday, July 30, The Fire Will Transition Into Patrol Status With Three Engines Patrolling The Perimeter, Remaining Vigilant For Heat And Hot Spots. The Bureau Of Land Management Has Re-opened The Garnet Ghost Town Historic Site, But An Area And Road Closure Remains In Place For Areas Closer To The Fire For Public Safety And To Allow Firefighters To Conduct Monitoring Activities. Evacuation Orders And Warnings Are Being Lifted. Updated Area Closure Information And Map Is Posted Under Closures Tab. Stage 1 Fire Restrictions Are In Place In Granite County, Stage 2 Fire Restrictions Are In Place In Missoula And Powell Counties.
Coordinates:
46.818, -113.334

Weather Concerns:
A warming and drying trend will hold into Friday. Daytime high temperatures will increase through the weekend, accompanied by lower relative humidity. Winds will be light overall but with a switch to easterly winds up to 10-15 mph on Saturday.