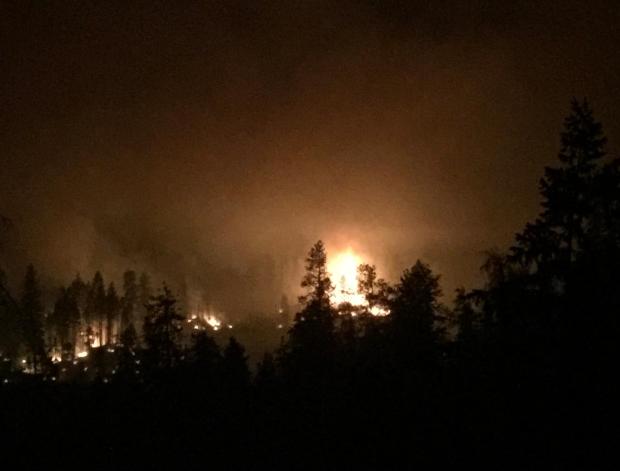 The Chuweah Creek Fire started on July 12 outside of Nespelem, WA.

Weather Concerns:
Relative humidity recovery overnight was again generally fair to good, in the 45 to 60 percent range. Temperatures were noticeably warmer overnight though, and with lows only falling into the upper 60s, are an early signal of a trend to warmer and drier conditions. Winds to around 10 mph have been seen, with gusts into the middle
to upper teens. Temperatures this afternoon have taken advantage
of the warmer start, rising well into the 90s, while humidity has
fallen to around or below 20 percent.

Humidity recovery in the 30 to 45 percent range is expected, with the best recovery tonight only managing to meet the worst recovery in the area last night. Lows are also expected to be warmer, only falling into the upper 60s to around 70 degrees. At ridges and on high slopes, expect winds to be stronger than generally seen at night, in the 10-15 mph range with gusts to around 25 mph. Terrain driven winds are expected for the lower slopes and valleys, but valleys that are better aligned with the stronger general winds may be
more variable.

Hotter and drier weather will be the norm through the end of the
week, and an excessive heat warning remains in effect through
2000 on Saturday. Expect high temperatures to rise well into the 90s each day, and highs at lower elevations around 100 degrees. Minimum relative humidity values look to bottom out below 20 percent and below 15 percent in some locations. After a gustier than usual morning, winds on the ridges will be in the 8 to 13 mph range Thursday afternoon, while terrain driven winds will prevail on lower
slopes and ridges. Heading into the weekend, look for general winds to become more southwesterly, while terrain winds continue to dominate the low elevations.

The hot stretch should come to an end in the second half of the
weekend, with forecast highs falling through the 80s and even into the 70s early next week. This cooler environment is driven at least partly by increased clouds, as well as increased chances for rain.