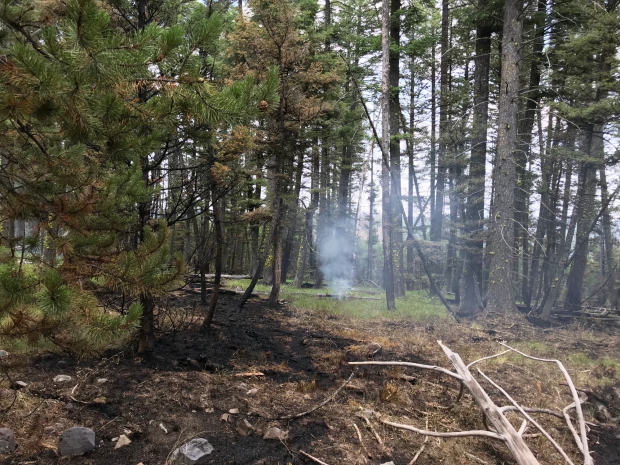 This will be the final update for the Goose Fire unless significant activity occurs. The Goose Fire is currently 7,522 acres and 90% contained as of August 9, 2021. The fire was ignited by lightning on July 1, 2021 32 miles SSE of Ennis, MT near Hoodoo Pass. Initial attack forces responded to suppress the fire, initially located in a 250-acre rock slide area, inaccessible to crews. On July 9, the fire moved eastward into the Lost Spring drainage south of Cliff Lake and north of Hidden Lake and up onto the Hidden Lake Plateau. Several air tankers dropped retardant to slow further progression. Joe Sampson’s Type 2 Northern Rockies Wildland Fire Management Team 5 assumed command of the fire at 6 am MDT on July 10, extending containment lines around the north, south, and east flanks. The fire is currently being managed by a local Type 4 Incident Management Organization.

Planned Actions:
There is no visible heat in the fire area and the acreage remains unchanged. Crews and equipment will continue to conduct suppression repair and monitor the fire.

Weather Concerns:
Warmer and dryer temperatures are expected, but not anticipated to affect this fire, which has shown no visible heat nor smoke.