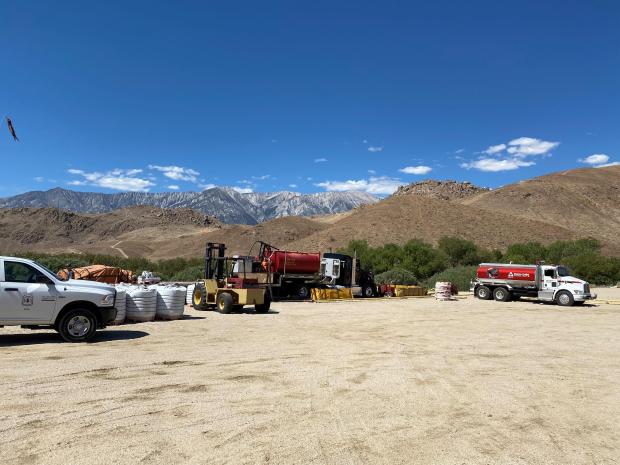 Current Situation: This will be the final update for the Inyo Creek Fire. Containment is now 100%.

The National Recreation Trail (NRT) which begins at Lone Pine Campground and ends at Whitney Portal  is closed under Forest Order 05-04-54-21-17 through November 30, 2021.

The Meysan Lake Trail, Whitney Portal and Lone Pine Campground have all reopened.

Fire Restrictions are in effect for the Inyo National Forest and Bishop Bureau of Land Management (BLM). Campfires are allowed only in developed campgrounds and recreation sites. A portable stove or lantern using gas, jellied petroleum or pressurized liquid fuel may be used with a valid wilderness or California Campfire Permit in dispersed areas. No fireworks are ever allowed on the forest. Smoking is allowed within an enclosed vehicle, building, a developed recreation site, or in an area at least three feet in diameter cleared of flammable material.  View additional details.

Fireworks are never permitted to be ignited on Forest Service, BLM and Los Angeles Department of Water and Power (LADWP) land. Due to hot and dry conditions, the danger for wildfire is extreme.

Campfires are not allowed outside developed Inyo County campgrounds; always ensure your fire is fully extinguished after use.

The US Forest Service has requested a BAER team to assess impacts from the Inyo Creek Fire.  The team will spend several days conducting burn severity mapping, erosion severity ratings, and inventory values at risk, as well as find ways to mitigate these downstream risks.   Read more about Burned Area Emergency Response (BAER)

The Inyo National Forest, Bureau of Land Management, Bishop Field Office, and the Eastern Sierra Sustainable Recreation Partnership (ESSRP)  remind you that while you are enjoying the spectacular scenery and outdoor activities that the eastern sierras have to offer, you have another equally important task, learning to recreate responsibly.  To assist you in both learning these skills and teaching them to the next generation of outdoor enthusiasts, the Eastern Sierra Sustainable Recreation Partnership (ESSRP)   has developed a handout of common-sense outdoor tips and tricks to help you Camp Like a Pro.  Print the “Camp Like a Pro” flyer to take with you, and to give to those traveling with you  Read the Full Article.

While we are all accustomed to seeing helicopters taking water from lakes and streams during fire operations, they can also be used to apply fire retardant.   They do this through the use of Mobile Retardant Bases.  Read More about Mobile Retardant Bases, and how Fire Retardant Works  Video of Aviation Total Gallons Dropped

Did you know that Fire Camps recycle 30 – 40% of their waste?  The “Greening” of Fire Camp is an amazing process through which fire camps recycle waste and stay organized.  View article, a YouTube link, and photos.

The National Interagency Fire Center announced on June 22nd that the National Preparedness Level was moving to Level 4 (PL4)   Within the last 20 years, 2002, 2008, and 2012 are the only previous fire years when the National Preparedness Level has been increased to PL4 in the month of the June. Since 1990, June 22nd is the second earliest we have increased to PL4. #FireYear2021  Read more about PL4, or visit nifc.gov/

The Inyo Creek Fire was ignited by lightning from passing thunderstorms, and was discovered on June 19th.  It is located within the John Muir Wilderness Area, northeast of Lone Pine Peak.  Federal managed wilderness is managed in the most pristine manner possible, "Where the earth and its community of life are untrammeled by man".  This area is home to the Sierra Nevada Big Horn Sheep, an endangered species; and to the Whitebark Pine which is a endangered species candidate.  These pines are an important habitat and food source for a number of wildlife species.  Low intensity natural fire plays an important role in maintaining the landscape within these areas.  Firefighters used Minimum Impact Suppression Tactics as they worked to contain this fire.

For questions about Mt. Whitney permits and other Inyo National Forest permits and trails that may be affected by the Inyo Creek Fire, call Colleen Pennington 760-878-8465, visitor information specialist.

The Inyo National Forest extends 165 miles near the California and Nevada border. It covers about two million acres, mostly on the eastern slope of the Sierra Nevada.

Approximately one million acres are in nine Congressionally-designated Wilderness Areas. Elevations range from 4,000’ in the Owens Valley to 14,494’ at Mt. Whitney, the highest peak in the contiguous United States.

Like all national forests, the Inyo is managed for ecosystem health and multiple uses, as directed by Congress. Although most visitors think of the forest for its recreation, the Inyo National Forest is also used for range, timber, minerals, watershed, and habitat for fish and wildlife.