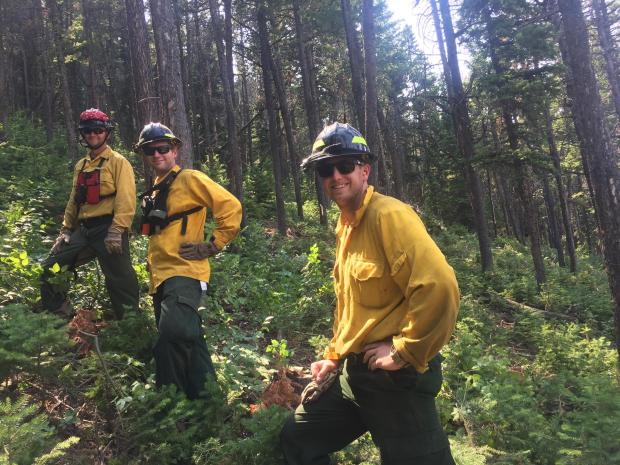 The Robertson Draw Fire started at approximately 2:17 P.M. on Sunday June 13th. Local fire departments and engines from the Custer Gallatin National Forest responded. By June 15th severe fire weather and behavior resulted in significant fire growth, as it grew from 2,000 acres to over 21,000.  Cooler weather occurred on subsequent days, including a 1/4" rain on Sunday June 20th, which helped to moderate fire behavior.

The fire area is in the midst of a warm/dry trend, and firefighters are remaining vigilant for changes in fire behavior and new fire starts due to the threat of thunderstorms and associated potential for strong, outflow winds.

Incident Command and cooperating agencies have discussed the long-term management of the Robertson Draw Fire. The area of concern is a portion of the fire burning on the northwest side of Mt. Maurice that is in difficult terrain and, in some areas, it is unsafe for firefighters to construct containment line and mop up hot spots. Firefighters completed containment line in the area on Mt. Maurice that they can safely access. Strategies are being implemented that reduce firefighter risk and have a high probability of success in protecting private property as well as keeping the fire confined to its current footprint. Existing hand and dozer line will be used in concert with a network of pumps and hose to protect private property and other tactics, including aerial resources, will be used to hold this fire.

Transparency is necessary with the public to convey that there is a possibility of the fire not only picking up in activity, but also spreading past the current fire perimeter if certain variables such as fuel dryness and elevated fire weather were to line up to support fire spread. All measures are being taken to avoid this possibility, but a small portion of the fire perimeter is not able to be contained and the warm, dry trend will likely continue for much of the summer. Because of the inability to mitigate the risk to firefighters on the northwest face of Mt. Maurice, the area will be living with fire until a season-ending rain or snow event takes place.

Smoke may be seen on hot, dry days. Response will be strategic based on fire behavior, available resources, current and expected weather conditions, location of the activity, and the hazards within that location.

Total Personnel:
44
Size (Acres):
29,885
Containment:
90%
Fuels Involved:
Grass, Brush and Timber. Timber fuels contain a dead and downed component on steep slopes. Brush and grasses slightly curing on low slopes and out in the flats.
Significant Events:
Smoldering on the northwest portion of the fire perimeter. A type 1 helicopter dropped buckets on it over the weekend to keep heat down.

Planned Actions:
A masticator will assist in improve fuel breaks. Engines will continue patrolling the fire perimeter and a lookout will be posted to monitor for fire activity.
Projected Incident Activity:
12 hours: Creeping and smoldering. Minimal growth can be anticipated

24 hours: Creeping and smoldering with some potential for isolated torching due to a warming and drying trend. Minimal growth can be anticipated.

48 hours: Creeping and smoldering with some potential for isolated torching due to a warming and drying trend. Minimal growth can be anticipated.

Weather Concerns:
A more unstable weather pattern begins with daily chances for afternoon thunderstorms. Storms will begin on the drier side with increasing chances for wet storms later in the week. Thunderstorms bring the possibility erratic winds and heavy rain. Daily temperatures are expected to be in the mid-80s the remainder of the week.