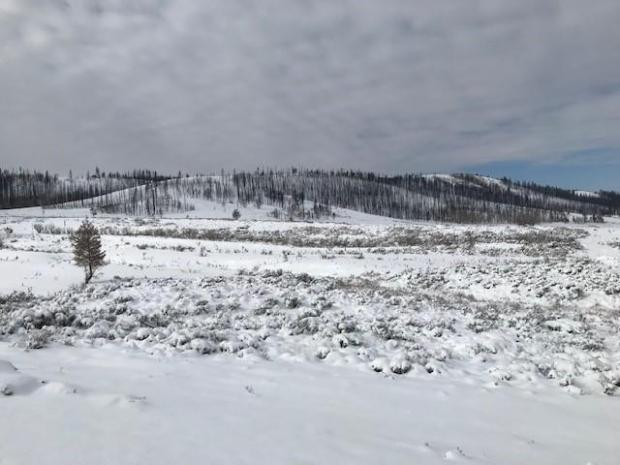 The Mullen Fire is burning in the Medicine Bow National Forest (MBF), southwest of Centennial, Wyoming. The fire was reported in the Savage Run Wilderness on Thursday, September 17, and spread rapidly in extremely rugged terrain, with dense vegetation and beetle-killed deadfall. The fire continues to burn and has damaged 66 structures. The cause of the fire remains under investigation.

Firefighting priorities are public and firefighter safety, the protection of structures and community infrastructure.  Values at risk include multiple communities in the surrounding area and the Rob Roy Reservoir.  Rob Roy Reservoir is the water source for the city of Cheyenne.

The largest spread of the wildfire occurred on Saturday, September 26, when western winds reached 70 mph pushing the fire across the southern portion of Medicine Bow National Forest. On Wednesday, September 30, the fire crossed into northern Colorado creating a more complex fire with additional challenges.

The Mullen Fire is a full-suppression fire in which firefighting resources have engaged fire where there has been the highest probability of success. Previous mitigation projects in the Rambler community provided a fuels transition that allowed firefighters to access the fire perimeter more aggressively. Burn scars from the Keystone, Badger Creek and Squirrel Creek fires were critical in slowing the progressing of the fire.

On October 24 and 25 a winter storm brought up to a foot of snow to the fire area, This significantly reduced fire behavior. Despite this snowfall, the area has been locked in a stubborn drought since springtime and currently is experiencing a warming and drying trend. Heavier fuels continue to smolder, and it is likely that sustained heavy snowfall will be needed before the fire is completely out.

On October 28 the last pre-evacuation order was lifted by the Albany County Sheriff.

Weather Concerns:
Warmer conditions with wind from 10-25 mph will continue through the week, with snow expected Saturday evening into Sunday.