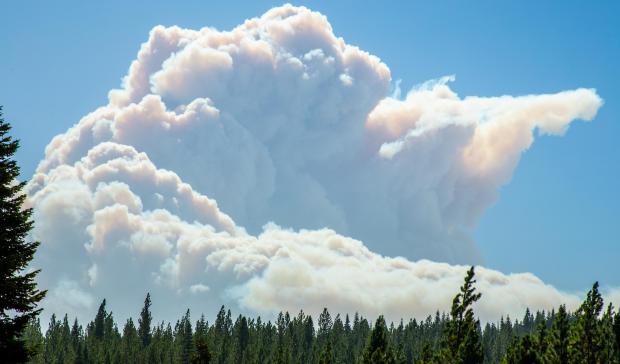 Firing operations along the Pacific Crest Trail have been completed and night shift will be nearing completion along the dozer line that parallels LaPorte Road. This firing needs to be completed and secured before there is repopulation of Little Grass Valley and the Community of LaPorte.

Ignitions were not favorable for the day shift along Grizzly Big Creek but the night shift will have the conditions to carry out the firing operations. A portion of Red Mountain Road was lit earlier today and firing operations will continue into tonight.

Thank you for your patience and support throughout the incident, especially in the mandatory evacuated areas. The ignitions on the south and north zones need to be completed and entirely secured, which we are expecting within the next 1-2 days, before we can ensure residents can return home without having to leave a second time.

For more information there is a daily recorded operational briefing video that will be posted to the Plumas National Forest Facebook Page at 9 a.m.

Orders and Advisories are still in place for communities in Butte, Plumas, and Yuba Counties. Please check your respective county’s websites and Facebook pages for the latest on evacuations and road closures. You can also sign up with your county for reverse 911 notifications by registering with the CODE RED system.

Another chilly night ahead with temperatures ranging from 35-52 degrees, it will be particularly cold in the valleys due to the clear skies and downslope and down valley terrain winds. Humidity should recover well again but not quite as well as previous nights.

The fire remains active in timber, brush, and grass. The fire has burned into several burn scars including the 1999 Lookout fire, the 1999 Pidgeon fire, the 2008 Cold fire, the 2008 Scotch fire, and the 2018 Camp fire.
Significant Events:
Active
Running
Spotting
Isolated Torching

Division BB: Firing operations will continue on the dozer line paralleling the La Porte Road, moving north to the Middle Fork of the Feather River.
Division DD: Completion of firing of the Pacific Crest Trail east to the 22N27 and the La Porte Road systems.
Divisions GG and JJ: Continue to hold and mop up to mitigate any threats to current containment lines.

Divisions P, S, V, X, and Z: Continue to hold and mop up to mitigate any threats to current containment lines.
Division AA/TT: Continue to hold and mop up.
Firing Group: Continue to fire the Grizzly Big Creek Road, keeping the fire south of the Grizzly Forebay, tying into the 23N33Y Road.
Division MM: Improvement of direct line with dozers anchoring on the Oro - Quincy Road working west to the Camp Fire burn scar.
Division QQ: Mop up and secure the Red Mountain Road.
A structure protection plan is in place for Buck's Lake, Haskins, Highlands, Meadow Valley and Tollgate.

Fire lines are holding in Branch XXIII and Branch XXV on the western perimeter of the fire and Branch XX (Division F and Division I) on the southwestern perimeter of the fire. Crews are reinforcing direct firelines, mopping up, and conducting tactical patrols around structures. Crews will continue to work in fire impacted areas and are engaged in making areas safe for repopulation, and notifying agencies where infrastructure hazards exist.

DINS teams will continue their efforts to gather official information on the impact to structures in the burn area.
Projected Incident Activity:
North Zone/South Zone -

West Zone -
Fire lines are holding in Branch XXIII and Branch XXV on the western perimeter of the fire and Branch XX
(Division F and Division I) on the southwestern perimeter of the fire. Crews are reinforcing direct firelines,
mopping up, and conducting tactical patrols around structures. These operations have reduced the fire threat to the communities of Parkhill, Yankee Hill, Big Bend, Cherokee, Oroville East, Hurleton and Robinson Mill.

In Branch XX on the southeastern perimeter of the fire in Division C, the fire continues to burn in heavy fuels and steep terrain south to Lost Creek. In Division D, the fire continues to burn southwest down to the South Fork of the Feather River and South towards Forbestown Reservoir Road. Crews are actively constructing direct and indirect control lines and tactically burning existing control lines to keep the fire from moving into the communities of Forbestown, Woodleaf, Clipper Mills and Strawberry Valley.

The weather will transition to slightly cooler temps and low RH. Moderate overnight recoveries. Increased cloud cover. Fuels will remain dry and very receptive. Forecasted SW winds will test containment lines in the North Zone. Potential for spotting in DIVs MM, QQ and TT due to SW winds. Alignment of wind, fuel and topography will contribute to active fire behavior. Divisions BB and DD will experience interior creeping and smoldering from firing operation.

Slightly lower temps and rise in RH over the next few days. Increased cloud cover (from 15-20%). Forecasted SW winds (12 mph) today and decreasing over the next few days. Good overnight recoveries. Ground, surface and aerial fuels remain receptive. Expect active fire behavior where clear are exists. Probability of ignition will be approximately 60% during the day.

Temperatures will be like yesterday and will remain consistent over the next few shifts. RH will be in the twenties during the day with good recovery at night (60-65% range). We will see a slight decrease in cloud cover (20% down to 15%). Expect SW winds 9 mph. The potential for active fire behavior continues to exist where slope and wind align. Probability of ignition will be approximately 70% during the day.

The North and South Zones are managed by CIIMT4.

The incident is being supported by the MQ9 to capture supplemental infrared imagery.

The incident is significantly understaffed and orders for resources continue to go unfilled.

Overhead resources including DIVS and TFLD are needed to manage firefighting crews and equipment, and to establish effective span of control.

At the request of OES, CIIMT4 and CAL FIRE IMT 4 are supporting, under the direction of the Butte County Sheriff, the implementation of Urban Search and Rescue operations on the North Complex.

The North and South Zones of the North Complex have been hosting hand crews from Quebec, Canada.

Three crews have completed a full assignment. A new crew arrived recently and has been integrated into operations on the incident.

Box 31. Change in evacuated number is to indicate that portion of the population allowed to return to their residences.

Box 32. Breakdown of Responders with Injuries/Illness:

Area Closures:
The USFS has implemented Regional Order No. 20-10, closing all National Forests in Region 5. The document can be found at: https://www.fs.usda.gov/Internet/FSE_DOCUMENTS/fseprd801412.pdf

Perimeter acreage based on initial NIROPS intelligence and is viewed as draft until verified by line personnel.

Weather Concerns:
Synopsis: Weather conditions day today will remain fairly similar into the new week. General winds are expected to stay around 10 mph, and terrain influence on the winds will be a daily consideration. Temperatures and RH may fluctuate a little, but changes will be minor. In the long term, a pattern change is possible with a weak front at the end of the week, followed by building heat to begin the next week.

12h (Overnight): Tonight will look very much like the past two nights, as skies continue to be mostly clear. Look for cold air to pool in the valleys, with temperatures in the mid-30s to around 40 degrees. Higher slopes are expected to stay a bit warmer, with lows closer to 50 degrees. Light general winds means that nocturnal downslope/downvalley winds will prevail across the area.

24h (Monday): With the weather in a stable pattern, Monday should be fairly similar to the Sunday values. We may end up slightly cooler in the afternoon, as a front moving into the Pacific Northwest may give us a few more clouds. Relative humidity would also nudge up slightly. As for winds, the light to moderate SW general flow battling with terrain-driven flow is also expected for another day. An occasional gust to 20 mph may occur at ridgetops and on slopes, but become less likely heading down into valleys.

48h (Tuesday): Tuesday is expected to be very much like Monday, as the Pacific Northwest front weakens and washes out before reaching our region.

72h (Wednesday): With the indirect influence of the distant front out of the picture, its small impact on the fire area should disappear, and any small changes from that should be reversed, with temperatures warming slightly and relative humidity dropping similarly.

After 72h: Thursday is expected to be very much like Wednesday as the stable weather continues into the late week. Beyond Thursday, however, there are indications of change. Look for a cold front to cross our area late in the week, likely Thursday night or Friday morning. At this time, the front itself does not look particularly strong, but there is a building consensus in forecast guidance for a sharp increase in heat early next week after the front has departed.