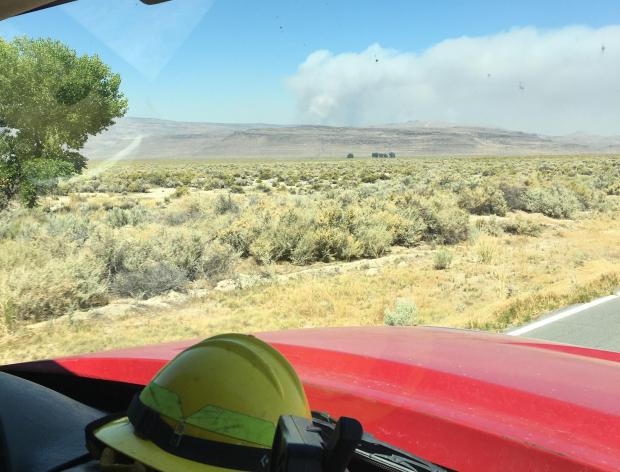 The Poodle Fire was reported on August 12, 2020, at approximately 3:16 p.m.  It was started by lighting that passed through the area the previous day.  In the first two days, the fire was pushed by high winds through juniper, sagebrush and grass.  Extremely low relative humidity, high temperatures, and strong winds pushed the fire east and across Highway 447 on August 13.  There are no closures or evacuations, and no structures have been lost.

A Type 2 Incident Management Team assumed command of the fire on August 15.  A fire camp has been established northwest of Gerlach, Nevada, to support the firefighters working on the Poodle Fire.  The fire is burning in sage grouse and bighorn sheep habitat within the Poodle Mountain Wilderness Study Area and the Granite Mountains.

The Poodle Fire has not grown in acreage since 8/15.

Weather Concerns:
Thunderstorms remained south and east of the fire area today, but southwest winds were gusty at 12 to 18 mph with gusts to 30 mph. It remained hot with temperatures in the 90s and relative humidity in the teens. Tomorrow, a Red Flag Warning is in effect for strong west to southwest winds. Speeds are expected to reach 15 to 24 mph with gusts to 35 mph as relative humidity drops to near 10%. Temperatures will remain hot and well into the 90s. It will remain breezy Thursday and Friday with west wind, gusting to 25 to 30 mph. Temperatures will cool about 5 degrees but it will remain dry. Similar conditions are expected into the weekend.